Critter Chaos
This pet was raised without the use of PetzA for an event hosted at PUGZ in July 2016.

7/12/2016 - "A gameplay contest is meant to get back to the game basics. Pick a pet of yours of your choice, and without using PetzA, you complete each day's task while recording them on a website. Organize it however you want. "

For this event I decided to breed a pet specifically for it so that it would truly be a surprise! I grabbed a bunch of random OB pets from the adoption center, bred pairs once and kept the kitten no matter what to use in the next wave of breeding. I decided to stop at the 6th generation no matter what that kitten looked like!

I wanted a pet that I didn't know because I felt that would make this process more enjoyable since not only are the readers getting to know about Carrot Cake for the first time but I too am experiencing this all as it happens and each day has more potential to bring something new!

Carrot Cake and I headed over to get some cute accessories! I settled on a cute green bow to accent her already very green eyes. It's perfect and she seemed fine with wearing a ribbon! I'm not usually one for many clothes on petz, I like small things because it lets me see more of the pet itself and she's so cute already!

With a cute ribbon selected and a very purry-kitten we headed off to the Toy Closet to find something little miss C.C would like.

I laid out a selection of small kitten-appropriate toys. I didn't want something too big or too small and the soft plush toys are super cute! CC seemed shy at first, a bit of her Oshie personality kicked in and she shook a bit. I was a little worried we might not get a toy at all because she seemed overwhelmed before I even started recording. She did focus on a cute lion plushie after a while and it seemed like we had a clear winner!
As we were about to leave she stopped holding the Lion and focused intently on the Red Squirrel. She picked it up and started doing something that I cant recall seeing a pet do. It has been a very long time since I actually -played- petz like I used to before PetzA so perhaps this is common but I scrambled to record again and managed to catch her doing THIS.

She did this for so long and I was so amused that we played in here for much longer than intended but I did pack up the toys and we took both the Red Squirrel Plushie and the Lion Plushie for backup to the backyard....unfortunately....
This is how our backyard playing went....
OOPS, i tired out my kitten! She had too much fun! We had a nice nap in the yard instead and a passing mouse played with the toys instead while I did some picture editing and writing! After her nap we headed to the kitchen for some food! 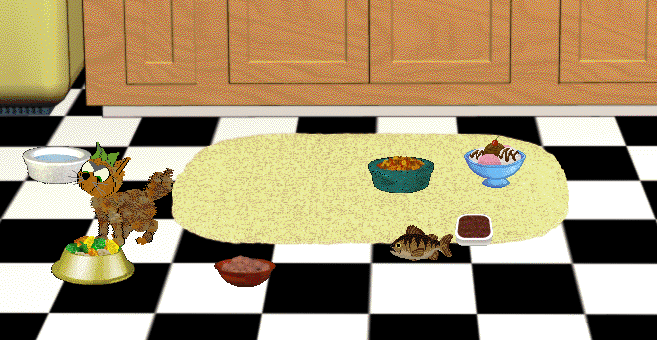 I laid out a variety of things, staying away from treats and focusing on meals themselves first! She inspected each thing but the vegetables were NOT acceptable and she let me know quite quickly. Those got put away and she looked at the other foods.

She had a few nibbles from the red bowl and moved to the meow mix and had some of that! But then she spotted something so sweet~

And promptly shoved her entire face in the ice cream bowl! She seemed pretty full after sampling everything except the fishy and the dog food (Some cats seem to really like it??) BUT THEN, more of THIS happened!

I admit. I am pretty won over already purely based on CC's obsession with Throwing things. This seems to be her favorite way of playing already and she kept doing it long after i started recording. Why are you so cuuuute!!?!!!!?!?!!?!!?!?

Today Carrot Cake was a little shaky, part of her oshie personality shining through I suppose! I spent a little time with her one-on-one before introducing her to any other petz. I picked a bunch of petz from an unsorted petz folder at random and sorted out some that were her age to try out! I was really hopeful that she and Scone would it hit off.

Apparently that wasn't gonna happen! They fought a little bit before I even had a chance to start recording and after that it seemed there was no going back! Carrot Cake was terrified of Scone. I guess there's no room for other desserts in this outing! So sadly it was time for Scone to go back and before I could pick another pet Malt came to the door. Might as well start with a volunteer, eh?

They seemed to hit it off pretty well! Though Carrot Cake did decide to start grooming, guess she cant go to the Beach without looking her absolute best! Shortly after Malt also joined in on the grooming experience, though he was reluctant to sit on the chair. With grooming time done we headed out to the Beach with a selection of toys and snacks!

Both kittens got to see cute hermit crabs but the waves interrupted that meeting and I had to spend a while consoling them both with petting and snacks! We also brought along some music and the rest of our trip was spent with both Carrot Cake and Malt chasing the toy car around in the sand. Carrot Cake ate a liiiiittle too many snacks though and was a bit slower than Malt was!
We got back home and i got out a brush to clean up the kittens! Malt got to be first and i set the brush down for just a second after finishing brushing him when Carrot Cake jumped over and picked it up! She was jealous! She wanted brushing too but when i went to grab the brush she wouldn't let go but still was brushing her! So unusual. I even stopped but she kept right on purring up a storm and eventually the brush VANISHED.

The kittens ate one too many snacks at the beach and considering the missing brush i decided to not offer them more food. I'm pretty sure Carrot Cake managed to eat that brush somehow. We settled down in the Family Room for a nap, both kittens picked the same pillow despite me setting out two! So cute!

I could tell today was going to be...difficult and long. I have a nervous bundle of oshie-fluff and the goal is to try and get her to do things that could be "scary". I grabbed the berries and a few other boxes of treats and set about attempting to "train" my tiny floof.

It went about as well as I expected. "What's that?! A treat! MINE" and then a flying leap of death onto said treat until i gave in and let the little monster have it. At least they're berries, she likes fruits so that's good clearly! I have thus trained my kitten to be extra grabby! A proud moment! She's a well trained treat detector, a skill to be envied!

After what felt like forever we tried out music for an eternity. Many songs were attempted and CC was having none of it. She was more interested in bringing me the music box and changing it to lullabies which is the opposite mood one wants for an activity like dancing or singing. I don't think my little kitten is an artsy cat.

Next we gave the hoop a go. She didn't run away shaking so there was progress there! She was a little aprehensive and for a while I thought she might actually try to jump the hoop buuuuut...aww well...close enough i guess. All those sleepy songs and new things seem to have worn her out!

After a little nap we got ready to go visit the snow for the first time ever! I don't think i've even visited that scene in the last few years. She was VERY focused on a snowball I made for her. She ignored everything else and played for ages. Even when someone came to visit!

We got all warmed up, snowy clothes removed and had some snacks and another nap! Carrot Cake seems to tire pretty easily, because she's a kitten or oshie? I'm not sure! We also noticed that part of her socks were stuck on her! First she eats brushes and now she makes sock-bracelets!